Perry Dennis And The Twylight Shadows 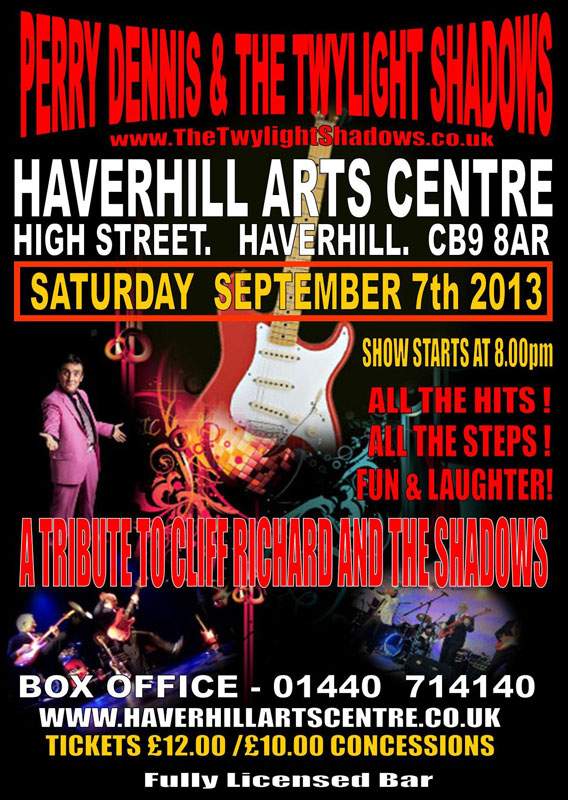 One of the uk’s top Cliff Richard and The Shadows tribute bands, Perry Dennis and The Twylight Shadows are appearing at The Haverhill Arts Centre on Saturday September 7th  2013.

The 6 piece live band are made up of experienced musicians from Cambridgeshire, Northamptonshire, Hertfordshire and London. The show comprises of all the classic Cliff Richard and The Shadows hits from  “Move It” released in 1959, to “Singing the Blues” recorded and released  in 2009, to coincide with their  Final Reunion  50th anniversary tour.

The show itself is based on the Final Reunion Tour featuring all the great hits from the late 1950s including: Move it , High Class Baby, Living Doll; into the swinging sixties with hits such as Voice in the Wilderness, Please Don’t Tease and In the Country; plus hits from the films The Young Ones, Summer Holiday and Wonderful Life, and of course, some of the best-selling instrumentals of all time Apache, Wonderful Land, Sleepwalk, Foot Tapper and so on. Every song is solid gold nostalgia. All the songs are presented with the famous shadows steps as well as some comedy along the way, and with the matching fiesta red Fender guitars and Vox amps the band really looks the part. It is as close as you can get  to the modern Shadows sound, the band have even been complimented by The Shadows themselves.

The show is a full two hour live theatre show with a 20-minute interval for refreshments.